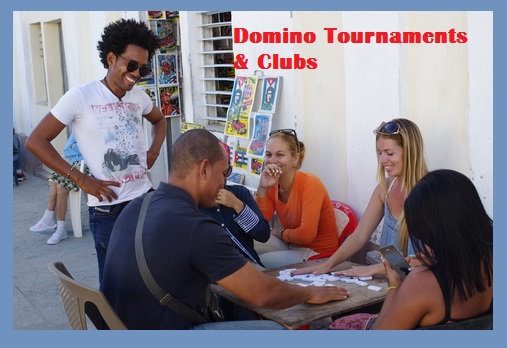 There was a time before all our electronic entertainment when people would sit down around a table and play a simple game of Dominoes while they chatted. It was simultaneously a social event and a challenge of mental abilities.

Many similar pastimes that once existed have long since faded away and been swallowed by time, but Dominoes has hung on and is refashioning itself.

This reconstruction of this pastime into a competitive sport has not been easy. There have been many ambitious attempts to try to create a World Dominoes Organisation and the Internet is full of abandoned websites that held such ambitions. Instead, Dominoes has developed in piecemeal regional and national fragments that have minimal connection to one another.

looking globally at the growth of Dominoes we see small unconnected areas of growth and a lot of ambition.

In the USA there are two main camps. The first is based around Andalusia, Alabama, where an annual tournament has been staged since 1976. This competition, World Championship Domino Tournament, in reality is mostly attended by players from the USA, in particular, Texas, Georgia, Missouri, Florida, Oklahoma, and Mississippi.

The second camp is made up of mostly from immigrants from the Caribbean to the USA who have built a network of Dominoes Clubs based around New York. Many of these clubs are located in converted basements and have spawned the name Brooklyn Basement Domino League.

Elsewhere across the USA groups of Caribbean immigrants have joined clubs to play this game that reminds them of home.

In the Caribbean Dominoes is very strong and there have even been attempts to work towards making Dominoes an Olympic Sport; they take it that seriously. From Trinidad to Cuba, the Caribbean is hooked on Dominoes, it is second only to cricket as a national game. This love of dominoes has spread further and in Puerto Rico, the Dominican Republic and other Latin American countries; it is also very common.

There is also another embryonic World Championship being developed here. The Dragon Stout World Domino Championship is sponsored by Dragon Stout and after the 2018 championship, they said they were looking at bringing foreign players to the 2019 championships and possibly opening other events in other countries where the beer is sold (North America and Europe). The championship was supported by minister Olivia “Babsy” Grange who said the government was behind the initiative. This competition is currently being reviewed and will hopefully return in 2020.

There is a national league competition in the UK called The Anglo Caribbean Domino League. In the UK the game tends to be very localized with pub teams competing against each other, however in2019 an American team of domino players visited the Uk to take on the best teams from this league.

In Mainland Europe there is another grouping of tournaments under the auspices of the Fédération Internationale de Domino. These operate in Germany, Switzerland and the Nordic countries.

There are dominoes competitions and clubs Australia. Some of these clubs are based around Latin American/Caribbean expat groups.

Now in its 44th year the World Championship Domino Tournament that takes place in Andalusia, Alabama will take place on July 10th 2020 – July 11th 2020 at the Kiwanis Fair Complex. The event is expected to attract more than 300 people to compete. this event is still very much a fun event where friendship is still an important factor. The tournament always takes place on the second weekend of July. Registration begins at 6:30 am on Friday.and at 8am the singles tournaments will begin. On Saturday at 8 am the doubles tournaments begin. On both afternoons Round Robin Tournaments will begin and on Friday evening a mini doubles tournament takes place. First place in the main competition will bring the winner prizes of $5,000 (2019). Smaller prizes are awarded up until 5th place. The competition is put on by the local Rotary Club.

Previously mentioned tournaments have been very much amateur tournaments. The UDL is designed to be a professional dominoes tournament with all of the organization that goes with it. They claim it is a place where professional dominoes players can advance their careers. Instead of using a pen and pencil to keep score they use UDL scoring chips (making it more like a poker tournament). They also have round girls like in a boxing match and generally a much more theatrical attitude.

Each player gets thirty of these UDL Chips worth five points each. The idea is that the two players have different colour chips and their aim is to win all the other player’s chips. There is also a time clock to speed up the game. One time infringement results in a warning and the second one disqualification.

UDL players are promoted/marketed to develop followings, they can be sanctioned and ranked based on the number of tournaments played, money won, and wins. It is all commercially run and organised. Men and women both compete in these tournaments, unlike the more amateur tournaments where players are primarily men.

Investors have been acquired so that the UDL can eventually become a TV franchise. The first broadcast event was the UDL Las Vegas Summer Classic Domino Tournament. The location was the Palms Casino Resort in Las Vegas and was held Saturday – June 29, 2019.

The next UDL Event is the “Grill & Bones Domino Tournament” and this takes place at the Universal Domino League Domino Lounge, in Las Vegas, on November 2, 2019. There are prizes for the top eight players:

1. 1st Place – $500 in Cash / The player will also receive UDL Trophy and some UDL Merchandise.

2. 2nd Place – $250 in cash / The player will also receive UDL Trophy and some UDL Merchandise

3. 3rd – 8th Place – These players will receive $100 in cash and also get UDL Trophies and UDL Merchandise

Note the UDL now has its own venue in Las Vegas.

The Cultural Aspects of the Game

You will have noticed that in many parts of the world where the game of dominoes is played, the USA and UK for example, a big part of the popularity is amongst members of the Caribbean diaspora who have brought the game with them from the Caribbean and use it as a connection to their homeland. In a recent interview on the BBC Benjamin Zephaniah talked about the importance of the game of Dominoes to the British Caribbean community.

immigrants missing their homeland talked about the sweet sound of the shuffle, that distinctive sound the dominoes make when being shuffled, as something that evokes memories of home.

There are also clear cultural differences between the way the game is played in the Caribbean and the way it is played in the UK. In the UK when played in pubs by the older generation it is a peaceful came where dominoes are placed on the table gently. Other people in the pub may not even be aware a game is going on. But in the Caribbean style the game involves a lot more activity, slamming the dominoes onto the table, hitting the table and a lot of loud commentary from the players, who will whoop and jump up if they win. It is all much more theatrical in nature.

In the Caribbean it is not just about the way you win but also about the way you lose. After a game both the winners and the losers will often be seen dancing and celebrating. Many players will have started playing as a child and will take pride in being able to count the dominoes, knowing from what is already played what dominoes will probably still be in the hands. It’s very much a mind game like Chess, where working out possible plays can be all absorbing.

In doubles play in most tournaments they are what is called open code games where partners may signal to one another using codes that tell the other player about dominoes held. Some experienced doubles partnerships may have several; sets of codes in case someone breaks their code.

This same importance to the community is equally applicable to the dominoes clubs in the basements in Harlem as they are to the clubs in the UK. They both originate from the same culture, growing up in a land where dominoes was almost a religion.

We can see from the previous section that the game is taking on a new commercialized appearance, following the same path as tread by the poker tournaments. Whether this is a purely American phenomenon or will spread worldwide as it did with poker is still not known.

Either was Dominoes seems to be growing in popularity globally as a fun activity where people can socialize and compete in a traditional way, far away from the electronic entertainment that is so visible elsewhere.